The most famous couples in sports stole the spotlight in 2022 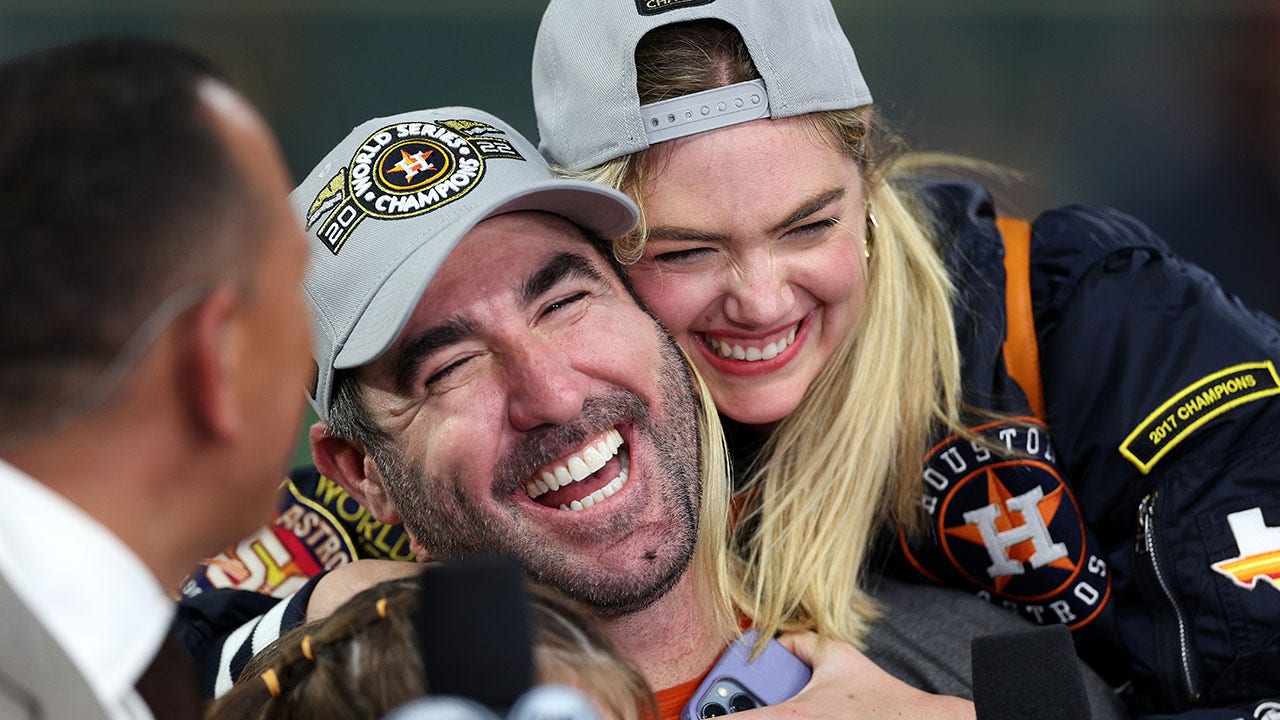 With 2022 drawing to a close, some of the sport’s famous couples had their moment in the sun all year long.

There were plenty of marriages, new children, great moments, and scandals across the sporting spectrum.

Read below for some of the most interesting moments.

Novak Djokovic celebrates with his wife Jelena after winning the men’s singles final match against Nick Kyrgios at the Wimbledon Tennis Championships in London on July 10, 2022.
(Li Ying/Xinhua via Getty Images)

Novak Djokovic caused a stir earlier in the year when he was trying to play the Australian Open. However, the Australian government’s strict coronavirus vaccine policies would prevent Djokovic from competing. Djokovic reportedly had a waiver, but it was rescinded just before the tournament began. He missed the tournament and would later miss the US Open due to New York City policies.

Djokovic’s wife, Jelena, was by his side throughout the event. She supported her husband when he was about to be deported from Australia and then came back to defend him when he was kept off the court at Flushing Meadows.

Dustin Johnson celebrates with his wife, Paulina Gretzky, after winning the LIV Golf Invitational – Boston at The Oaks Golf Course at The International on September 4, 2022, in Bolton, Massachusetts.
(Charles Laberge/LIV Golf via Getty Images)

Dustin Johnson and Paulina Gretzky are one of the most powerful couples in the sport. Johnson is a two-time Grand Slam winner and made headlines when he turned down the PGA Tour for LIV Golf. Gretzky is the daughter of NHL legend Wayne Gretzky. They got engaged to be married in 2013.

In 2022, the two finally made the leap, getting married in April. Johnson went on to have a great year with Gretzky by his side. He made $35 million on his trade to LIV Golf and led his team to a title.

Matthew Stafford had a great year despite all the trepidation he and his wife, Kelly, had about taking on a new challenge during the 2021 NFL season. The two celebrated a Super Bowl title in February, after moving from the Detroit Lions to the Los Angeles Rams.

The Staffords came under fire in February after the team celebrated the Super Bowl title. A photographer fell off the stage, and the star quarterback appeared to laugh. After the backlash over the incident, the Staffords agreed to pay for the photographer’s medical expenses and a new camera.

Sean McVay was also feeling good after a Super Bowl title run and just after establishing himself as one of the best coaches in the NFL. He and his then-girlfriend, Veronika Khomyn, met when he was an assistant coach in Washington and she was a student at George Mason University. The two got engaged in 2019 and married in June 2022.

Khomyn spoke about the war in Ukraine in a speech at the Critics’ Choice Awards in March.

«I am proud to stand with my fellow Ukrainians and admire their strength. They have faced unimaginable adversity with such profound grace and courage, their fight and the way they have brought the world together is truly inspiring. There is no place in our world for this type of violence and our prayers are with all the lives that have been lost.

Tom Brady was in the news for all of 2022, it seems. He decided to walk away from soccer and a month later he decided to return and the decision to do so apparently irritated his then-wife Gisele Bündchen. Brady took a few days off from training camp as rumors swirled about his marriage.

Brady struggled early in the season and then the duo decided to divorce after 13 years of marriage.

«In the last few days, my wife and I finalized our divorce after 13 years of marriage,» Brady wrote on Instagram. «We came to this decision amicably and with gratitude for the time we spent together. We are blessed with wonderful, beautiful children who will continue to be the center of our world in every way. We will continue to work together as parents to ensure they always receive the love and the attention they deserve.»

Bündchen added: «The decision to end a marriage is never easy, but we’ve grown apart and while it’s of course difficult to go through something like this, I feel blessed by the time we spent together and only wish the best for Tom.» forever.

«I kindly ask that you respect our privacy during this sensitive time. Thank you.»

Rhys Hoskins of the Phillies kisses his then-fiancee Jayme Bermudez during the Miami Marlins game on September 27, 2019 at Citizens Bank Park in Philadelphia.
(Nicole Fridling/Icon Sportswire via Getty Images)

Rhys Hoskins made an appearance in his first World Series for the Philadelphia Phillies during the fall. Although the Phillies lost to the Houston Astros, Hoskins hit a home run in the World Series and a memorable NLCS to lead Philadelphia to the Fall Classic.

Jamie Hoskins also had a memorable World Series. She became a fan favorite when she was seen buying beers for Phillies fans.

JAYME HOSKINS, WIFE OF PHILLIES STAR, BUYS BEER FOR FANS DURING GAME 3 OF THE WORLD SERIES

Legendary soccer player Gerard Piqué was embroiled in a scandal this year when he was accused of cheating on his wife, Shakira. The two had been married for 12 years and have two children together.

The two announced in June 2022 that they were separating and that Piqué had been in a relationship with another woman.

“We are sorry to confirm that we have parted ways. For the well-being of our children, who are our highest priority, we request respect for (our) privacy. Thank you for your understanding,» the two said in a joint statement in June. .

Justin Verlander and his wife Kate Upton had a fantastic 2022.

Verlander finished his final season with the Houston Astros with an 18-4 record, a 1.75 ERA, and 185 strikeouts. He finished with his third AL Cy Young Award and another World Series title to his credit. And Upton was there by his side throughout the entire process.

Upton went viral during the World Series for flashing the double middle finger at Phillies fans and became an instant fan favorite. To celebrate the win, he crashed the set of the FOX broadcast.

The two will now have a chance to make it big in the Big Apple. Verlander agreed to a contract with the New York Mets in the offseason.

Some things are bigger than achievements on the field.

While Patrick Mahomes and the Kansas City Chiefs failed to win a third straight AFC championship, something much better appeared: a new kid. Patrick and his wife Brittany welcomed a newborn baby boy into the world on November 28.

Patrick «Bronze» Lavon Mahomes III was born at 7 pounds, 8 ounces, the loving parents wrote on social media. The quarterback, who is named after his father, former baseball pitcher Pat Mahomes, posted a photo of the baby’s feet dressed in overalls. The piece of jewelry under the baby’s feet read: «Bronze.»

The two revealed that they were having a boy in June. Her second baby comes more than a year after Brittany gave birth to her daughter, Sterling Skye Mahomes.

More than a year after Lionel Messi left Barcelona and joined Paris Saint-Germain, the Argentine soccer superstar ended his 2022 by capturing the title that eluded him: the World Cup. Messi scored twice against France and another on penalties.

In the field, he and his wife celebrated.

Antonela Roccuzzo posted some photos on Instagram in support of her husband. She paid tribute to Messi and thanked him for teaching her and her family to never give up.

Messi and Roccuzzo got married in 2017. The two have known each other since they were younger and kept their relationship private until around 2009. The couple have three children, all of whom were in Qatar to watch Argentina defeat France.