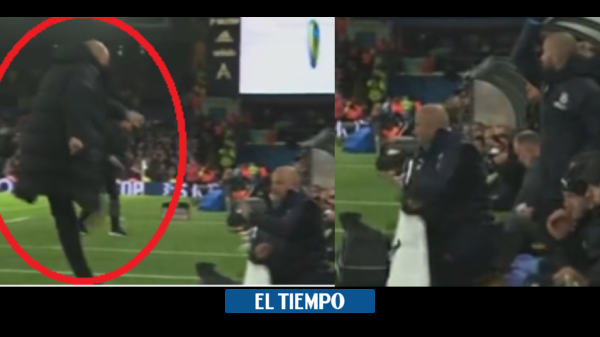 The manchester city resist the pressure and obtain a valuable 3-1 victory in their visit to Leeds United, this Wednesday at the close of matchday 17 of the Premier League, allowing Josep Guardiola’s team to remain in second place.

The Spanish Rodri Hernández opened the way to victory for the ‘Citizens’ on the brink of rest (45+1), this time due to the diagonal stripes used, and the Norwegian Erling Haaland then sentenced with a ‘double’ (51 , 64).

In minute 73, Leeds, fifteenth in the standings, cut short through the Dutchman Pascal Struijk, but could not advance further towards the comeback.

In the midst of these emotions, the city coach, the Catalan Pep Guardiola, was the great protagonist, because at minute 82, in a fit of rage, he kicked a bottle of water. And unfortunately hit an opponent.

(Also: Neymar: the unusual simulation of a penalty for which he was sent off with PSG).

Motivated by anger, in the final minutes of the game, GGuardiola chose to kick a bottle of water that was on the lawn.

What the coach did not expect is that, from the impact, the bottle would hit the rivals’ bench, where a member of the Leeds coaching staff received a tremendous blow.

Before Rodri’s goal at 45+1, Manchester City had missed several clear chances and Pep Guardiola couldn’t think of a better way to vent his anger than by kicking a bottle of water.

I end up impacting a member of the Leeds Coaching Staff 😂pic.twitter.com/KfUkyYtSQe

City had gone on a World Cup break with a worrying defeat at home to Brentford, but after Qatar-2022 they seem to be getting reassuring results. Before this victory, last Thursday they had beaten Liverpool 3-2 in the round of 16 of the English League Cup.