Dani Alves: his wife appears in a video sense after being sent to prison – International Football – Sports 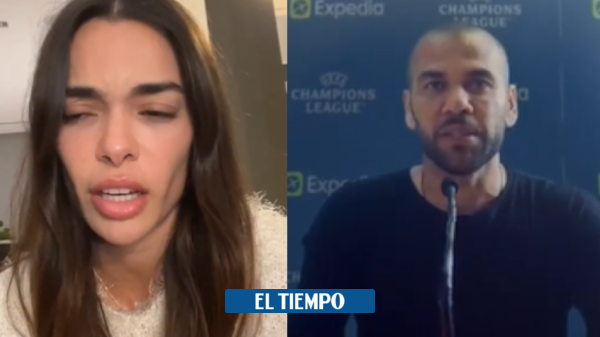 Daniel Alves He shares a cell with another inmate in the module to which most sexual offenders are assigned at the Brians 2 prison in Sant Esteve Sesrovires (Barcelona), a center to which he has been transferred this Monday because it has safer and less crowded facilities.

According to sources close to the center, after a brief stay in the prison admissions department, those responsible for Brians 2 have assigned him a cell in module 13, which usually houses the majority of those investigated or convicted of crimes against sexual freedom, although there are also those for other criminal offences.

In the midst of this situation, the soccer player’s wife, the Spanish model Joana Sanz, appeared for the first time on video. And she did it to be honest about the difficult situation she is going through.

(Do not stop reading: Dani Alves: the striking tattoo that would incriminate him in a case of sexual abuse).

‘The storm above me…’

Moments before Dani Alves was sent to prison, his wife, the model Joana Sanz, posted a message on social networks. «Together…» (Together, in English) is what Sanz wrote next to a photo in which her hand and that of her husband are seen, intertwined.

On January 5, Sanz had already spoken with ‘Antena 3’ about the complaint that began to be made public on January 2: “I know who my husband is, I know how I met him; I know how respectful he is because not even when he was getting to know me did he disrespect me. I have seen many times how women approach him, daring, to try something with my husband in my face. If they do it in my presence, I don’t want to imagine when I’m not there”.

This Friday, after being sent to preventive detention, Sanz reappeared on social networks with another message. This time, denouncing violations of his privacy and expressing his pain.

«I please ask the media outside my house to respect my privacy at this time. My mother has disappeared a week ago, as soon as he began to assume that she is no longer around to torment me with the my husband’s situation. I have lost the only two pillars of my life, they will have a little empathy instead of looking for so much news in the pain of others» (sic), Sanz pointed out in his Instagram stories, accompanying a photo of the moon, in Barcelona.

This Monday, with the change of prison, the message was even more direct: «Heart, please endure so much pain.» These letters, shared on Instagram, were located on the black background, of the Notes application, of Sanz’s cell phone.

And now with the details that have been compromising Alves, Sanz devoted himself to posting his first video in the midst of the situation:

«I wanted to make this video so that you can see me because I know that there are people who are very worried. Now I have a moment of calm in the middle of all the storm that I have above and I wanted to take the opportunity to verbally thank all the people who are supporting me. Really, I have some precious messages that not even the best books on psychology, self-improvement and encouragement have. It comforts me a lot that there are people who take their time to write me something so nice, thank you very much.»