Argentina champion: the party for the marriage of Nicolás Tagliafico – International Football – Sports 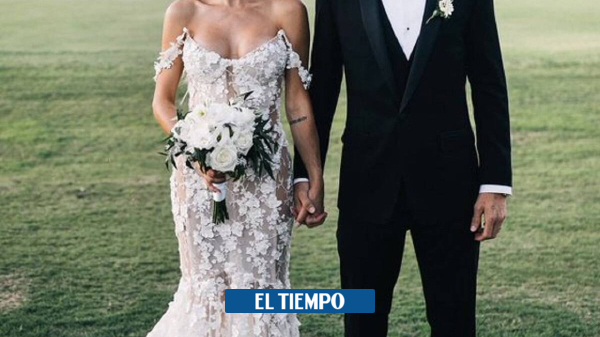 The Haras El Dok room of the Exaltación de la Cruz party in Buenos Aires served as the setting for the exclusive wedding of the Argentine National Team player Nicolas Tagliafico and his girlfriend of eight years, Caroline Calvagni, with whom he had already had a civil union in 2021.

With the World Cup theme present at every moment of the wedding, the person in charge of preparing the details was also a strong figure in the football world: the ex-wife of Diego Maradona, Claudia Villafane. And among the guests stood out the champions of the Qatar 2022 World Cup and the companions of the new husband, lautaro martinez Y Lisandro Martinez, who went with their partners.

He, in a black suit and bow tie; and she, with a dress made by the Israeli designer Berta Privée with a mermaid cut and hand-embroidered flowers that a friend brought her from Amsterdam, came out smiling for a few minutes to speak to the press who stood guard in the event room.

Before the guests, the defender said that the wedding was «very intimate» and referred to his teammates from the national team. «It was difficult for everyone to come, luckily we have family, very close friends, who are accompanying us tonight,» said the footballer, who said that the rest of the squad sent him messages so that he could enjoy the night. «It is the most beautiful thing there is to try to enjoy every moment and we are doing it,» said Tagliafico.

Regarding those absent from the squad, it is known that a good part of the world champions have already left for their respective clubs, while others are still in Argentina, but had commitments. In this last group was the captain Lionel Messi, who was seen together with Antonela Roccuzzo and her sons Thiago, Mateo and Ciro attending a niece’s 15th birthday in Rosario, her hometown, where she spends her days off.

Laughing, Tagliafico expressed, when he spoke to the media, that the level of nerves between saying «yes» and scoring the French front Kylian Mbappé in the World Cup final «were on a par» and commented: «Not for the ‘yes’ ‘, but the nervousness of the moment of the ceremony. I still don’t realize that we are world champions. Surely with time I will realize it and with the affection of the people, who every time we go out makes it notice”.

To close, the couple will say that there will be surprises at the wedding and also live bands. What he did not say was that Tagliafico himself was the one who was going to go on stage to sing, as was reflected on social networks.

In the religious service, Villafañe -who this year with his company has already organized other renowned weddings such as that of Florencia Peña or Barbie Vélez- opted for impressive bouquets of flowers in white, pink and lilac tones.

Diego Maradona’s ex-wife took a photo for Instagram with her work team and also shared postcards of the celebration where she was seen preparing the bride before entering the evening, until dinner at night, when the lighting and the vegetation were protagonists.

‘We are the Champions’ sounded in the middle of the party

In one part of their walk down the aisle, the couple walked to the rhythm of Don’t stop me now, by Queen. The British band also played at another key moment of the night. During the celebration, Tagliafico was shown with the gold medal and the World Cup that he won in Qatar. At that moment the song We are the champions was heard.

In the party favors, light blue and white also prevailed. While the hot topics exploded on the runway, the guests were distributed hairdressers and capes from Argentina. Likewise, Tagliafico designed t-shirts for the relatives who went to the hall to celebrate this union with them and even put on his champion’s jacket.